Fentanyl overdose deaths continue to rise in the United States, leading to a deadly third wave of the opioid epidemic. People with fentanyl addiction are suffering. Learn more about the best treatment for fentanyl addiction, which focuses on its triggers and root causes.

Drug overdose remains one of the most common causes of accidental death in the United States, with 67,000 overdose deaths reported in 2018. Almost 70% of these deaths are related to opioids. Although prescription painkillers and heroin are also part of this category of drugs, most opioid overdoses involve synthetic opioids like fentanyl. A sharp rise in fentanyl use caused public health experts to sound the alarm regarding this deadly threat.

Is Fentanyl an Opioid?

Fentanyl is a synthetic opioid, meaning it is produced in a laboratory setting different from heroin, resulting from naturally occurring poppy plants. In medical settings, fentanyl is used as an anesthetic, powerful painkiller after surgery or cancer-related pain. The medication is 50 to 100 times more potent than morphine, meaning it has full effects. It binds to receptors faster and in much smaller doses than other narcotic opioids.

Brand names for oral forms of fentanyl include Actiq, Fentora, Abstrat, and Onsolis, which come in lozenges, tablets, and film. Fentanyl patches include the brand names Ionsys and Duragesic.

How Long Does Fentanyl Stay in Your System? 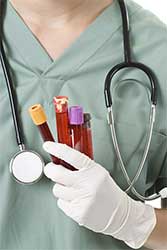 hours. The drug breaks down in the liver into norfentanyl and is essentially eliminated by the kidneys.

Studies show that norfentanyl can be detected for up to four days after last use. Drug tests are standard via urine, hair, and blood.

Here are some expected detection times:

Some medications, including Benadryl (diphenhydramine), can trigger a false positive for fentanyl. If you have recently taken Benadryl or any other drugs, let the testing lab know because different substances can compromise your results. Fentanyl is used to represent only a tiny fraction of opioid overdoses. In the 1990s, prescription painkillers like oxycodone (Oxycontin, Percocet) or hydrocodone (Vicodin) were the primary drivers of fatal opioid overdoses. The extremely high number of overdoses began to change as the CDC changed its prescribing guidelines for medical providers.

People struggling with opiate addiction began to turn to heroin and synthetic opioids instead. For example, West Virginia, which is at the heart of the opioid epidemic, showed a sharp increase in fentanyl-related deaths. Comparing 2005-2014 to 2015-2017, deaths involving prescription opioids decreased by 75%. Meanwhile, fentanyl-related deaths jumped up by 122% over the same period. This trend rapidly spread across the country.

There are several reasons for the rise in fentanyl use. Synthetic opioids like fentanyl are often manufactured in Chinese laboratories, where their production is legal. They then make their way to Mexico, where drug cartels traffic them across the southern U.S. border. From there, fentanyl makes its way across the entire country. Drug dealers often cut their products with fentanyl, which is cheaper and more potent. As prescription painkillers become less available in medical settings, people turn to alternatives, more accessible drugs.

How Does Fentanyl Kill You?

Fentanyl’s potency is part of what makes it so dangerous and deadly. A tiny amount of fentanyl can cause a rapid decrease in breathing and heart rate. In some cases, drug users are unaware that their product contains this deadly drug, and by using the same amount of heroin as they typically do, they may unknowingly get a dose far more potent than they realized. The presence of fentanyl in other drugs often leads to an unintentional overdose with deadly consequences.

The Rise Fentanyl Addiction During Covid

Not surprisingly, Wuhan, China, is one of the epicenters for fentanyl production. It was also the city in which the COVID-19 pandemic began. China’s lockdown of the city caused an interruption of fentanyl production. Online suppliers, or should we say, internet drug dealers, in early 2020, said that there was no supply available. Unfortunately, this did not have the predicted dampening effect in U.S. markets. Most U.S. fentanyl comes from Mexican drug cartels, who had vast stockpiles of the drug. The cartels kept flooding the United States with the deadly drug. In fact, given the enormous mental health strain caused by COVID-19, fentanyl overdose rates have increased in early 2020 despite the shutdown in Chinese production.

What Makes Fentanyl So Addictive?

Fentanyl binds tightly to these receptors, causing a boost of dopamine, the chemical that controls feelings of reward, pleasure, and relaxation.

Molecules like fentanyl fit into opioid receptors like a key fits into a lock. However, over time these receptors become less likely to activate with the same strength as they did initially-this change is the biological root of tolerance. Tolerance develops as a person needs higher and higher doses of the drug to achieve the same effect. Furthermore, as the individual continues taking this drug, the body’s opioid receptors get used to having opioid molecules floating around, which physically becomes a “new normal.” In other words, all body functions adjust to the presence of opioids. When the opioids are no longer present (such as when someone tries to quit cold turkey), the body enters into a state of confusion. This confusion is what leads to withdrawal. Withdrawal symptoms present themselves by causing the individual to feel diarrhea, muscle pain, tearful eyes, runny nose, sweating, restlessness, and rapid heart rate.

Collectively, tolerance and withdrawal symptoms are known as a physiological dependence on opioids. That means that the body comes to depend on opioids to function normally. Most people who take opioids for an extended period will develop some level of physical dependence.

Any attempt to stop fentanyl use causes a broad scope of negative physical and mental repercussions. A withdrawal syndrome is a process in which the body is suddenly deprived of the substance they have become dependent upon. The most common withdrawal symptoms are:

In extreme cases, where the fentanyl has been taken for a significant period or in enormous doses, withdrawal can even cause seizures and hallucinations.

Withdrawal symptoms generally start somewhere in the range of six and 36 hours after the last fentanyl use, and it can last days and sometimes even weeks. The exact period of withdrawal relies upon a few factors:

Emotional status and other health conditions are also relevant during withdrawal.

On the first day, the person might feel anxious, have some diarrhea, sweating, nausea, and muscle aches. As the second day approaches, things can begin to escalate as symptoms become more intense. Symptoms such as sweating, diarrhea, nausea (vomit), and muscle aches can be challenging to endure. For those who are able to continue with the detox process, days three and four can be challenging since exhaustion has reached a whole new level. Also, the pain of withdrawal symptoms can continue for a few days and may even worsen for some. If you are able to get to day five opioid-free, withdrawal symptoms usually start to ease up. However, some of these symptoms can continue, usually to a much lesser degree.

Withdrawal symptoms tend to be much more challenging when someone opts to “go cold turkey,” or quit fentanyl without being in a medical facility. Those who go through an inpatient medically assisted detox have a much more comfortable experience and often more successful.

What is Addiction to Fentanyl?

Fentanyl addiction is different from dependence. Addiction refers to a set of behaviors that cause a person to use opioids compulsively. Addiction causes a person to experience cravings for the drug. He or she will go to great lengths to find and use the drug. Work, personal relationships, and other obligations suffer.

Addiction doesn’t arise out of anywhere. Certain people are genetically predisposed to experience drug addiction, while others are victims of circumstances. Although some studies say that having a family member with addiction increases the chance of someone suffering from the same issues, mental health issues are also predominant factors. Many people first start abusing opioids to numb physical pain or emotional pain. Those suffering from trauma, depression, anxiety, stress, and other mental health problems often feel attracted to the numbing effects of opioid drugs.

While opioids might seem to work short-term, they are an inferior long-term strategy for managing mental health. The harmful physical and emotional side effects of opioid addiction take their toll, adding problems to an already distressful situation. That is why it is so essential to find an effective treatment for fentanyl addiction. One that is not just going to solve the physical issues but will be able to diagnose and guide the emotional components. By taking action to address the underlying causes of fentanyl addiction, one can someone achieve long-term sobriety.

Effective treatment for fentanyl addiction begins by treating physiological dependence. That means undergoing a complete and successful fentanyl detox. Detox clears the body of opioid molecules, allowing it to reset to its normal, drug-free state. While going cold turkey comes with unpleasant withdrawal symptoms, medical detox helps to ease that discomfort. In a medical detox protocol, particular medications clear opioid molecules from their receptors. Performing the fentanyl detox in a medically supervised hospital environment is safer and more humane than cold turkey. In a hospital, patients receive medical withdrawal management to ensure detox success, safety, and a positive outcome.

After detoxification, patients recover at the exclusive Domus Retreat for the next step of their journey. At this point, one focus is on allowing the body and mind to heal from the stress of opioid dependence. Simultaneously, a person is now ready to engage in ways to achieve a healthier path. A healthy approach focuses on mood, emotional functioning, life stressors, and other triggers that drive cravings. Only by addressing these root causes of fentanyl addiction can someone truly heal.

Fentanyl is a hazardous drug that has taken so many innocent lives. Getting treatment early is the best form to prevent health risks. But remember, not all opioid treatment programs are the same. Too often, patients do not have access to medical professionals and the resources needed to achieve an opioid-free state. Also, rehab centers primarily focus on “addiction” symptoms while forgetting to treat the individual in front of them. This lack of individualized care often leads to relapse soon after completing rehab, starting the addiction cycle again. To entirely fight the battle against the opioid epidemic, we need greater access to effective treatments. In other words, improve access to medical fentanyl detox programs followed by supportive mental health care.


Call now to speak confidentially with an addiction expert.

Committing to overcome addiction should not have to mean relinquishing comfort, privacy, or self-respect. Why not experience individualized care and comfort? If you’re ready to take part in a world-class private treatment program, it’s time to call Domus Retreat.
Call 1-866-713-3869

All topics for the DomusRetreat.com blog are selected and written based on high editorial quality standards and cited source material. Clare Waismann, Registered Addiction Specialist (RAS), Substance Use Disorder Certified Counselor (SUDCC) and founder of Domus Retreat and Waismann Method® reviews articles for accuracy, credibility, and relevancy. Clare Waismann is an authority and expert on opioid dependence and related topics covered on the DomusRetreat.com blog. For additional information and disclaimers regarding third-party sources and content for informational purposes only, please see our Terms of Service.